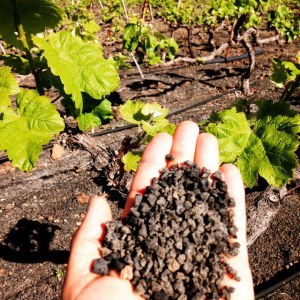 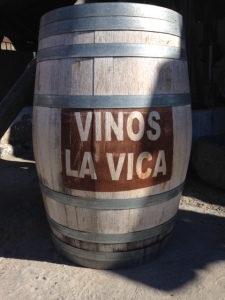 When you think of the Canary Islands,  beaches, resorts, and dry, arid, rocky terrain likely comes to mind.  While that’s mostly true, the island of Gran Canary is called a “small continent” thanks to it’s diverse climates and differing terrain.  In the area of Agaete and Santa Brígida, you’ll find a lush green oasis where coffee, oranges, avocados, mangoes, guava, and even wine grapes grow in abundance.  It’s reminescent of a drive through the French Riviera, just off the Mediterranean Sea.  Although wine grapes have grown in the Canary Islands since the 15th century, only recently the culture of wine producers and consumers has evolved to be mainstream, with tremendous pride in the wine making. Some Canarios have traveled throughout Europe and enjoyed high quality wines and decided it was time to put the Islands on the wine map.  Many are well educated and maintain a prestige and class known of the finer wines of Mainland Spain, France, and Italy.

Today, we will explore the definition of old school wine making at La Vica and Plaza Perdida, move up to Los Lirios which incorporates more Bordeaux style varieties, and finish up at the largest and most modern producer of wines on the island. Who better to explain what Santa Brígida has to offer than my friend, Victor Lugo Jorge, who is an owner at one of the older wineries on the island, Bodega Los Barrezalles (http://www.bodegalosberrazales.com/portada_ingles.htm).  Victor picked us up at the bus terminal, on time, another sign that Canario culture is changing.  He had hand picked wineries of different qualities and intrigue to visit on this magnificent spring day. We started off at one of the most historic wineries on the island, Vina La Vica (https://www.facebook.com/LaVicaDesentidos) and Vinedos Plaza Perdida (http://bodegasplazaperdida.com/).  Proprietors, Luis Molina Roldan and 78 year old Marcello greeted us and showed off their wine making facilities.  Although they each have their own vineyards, they share a property to produce their individual labels.  They maintain the original crush pad dating back over 200 years. We toured the facilities and barrel room (French and American oak).  Combined, they produce approximately 1,250 cases of wine annually.  Everything in the vineyard is worked on by hand.  They have Listan Negro vineros (vines) over 100 years old, and produce award winning wines. I tasted from a bottle of Vina La Vica 2013 Tinto wine, made up of 60% Listan Negro and 40% Tintia.  The Listan Negro has larger clusters while the Tintia are very small.  It was well structured and had nice red fruit flavors. From Plaza Perdida, I tasted Marcello’s 100% Listan Negro (2013) which was quite exceptional.  Both were barrel aged in 50% French oak and 50% American oak and produced “robles” style or 3 months in oak. Marcello is the definition of “old school.”  Although, he is 78 years old, it would not surprise me to see him producing wines for another 2 decades.  He is very passionate about his wine and he learned everything from his family, starting at a young age on his property. We drove up the road to Luis Molina Roldan’s finca (land) and he graciously walked us around his vineyard.  As it was Spring, the clusters had just started to form.  He has Listan Negro, Tintia, and a Canary white varietal, Malvasia.  An old volcano rises up his terraced vineyard meaning the soil is volcanic rock, and you can taste the minerality in the wines.  We enjoy a glass of Blanco Seco made form his Malvasia grapes.  It was a nice dry white with aromas and flavors of tropical fruit. Next, we drove a short way up the road to Bodega Los Lirios (https://www.facebook.com/bodega.loslirios).  The property was picturesque and well designed.  Owner Carlos Diaz-Reixa produces approximately 15,000 bottles per year.  He grows more mainland grapes that are starting to pop up on the island.  We tasted a bottle of Tinto Joven 2014 Tocon. Although this wine was only aged in the barrel for 2 months, I fell in love.  Made up of Tempranillo, Merlot, Syrah, and Castellana Negra, It was absolutely fantastic, bursting with flavors and the taste of the volcanic minerals so abundant in the terroir here.  I purchased a couple bottles of this wine and enjoyed one back home in California and was impressed, especially day 2.

Situated on top of the mountain was Hoyos De Bandama (http://bodegahoyosdebandama.com/).  The building is fairly new yet it was already being expanded to produce more wines. The winery reminded me of back home in Sonoma and Napa Valleys.  The tasting room was elegantly designed and they had logo merchandise for sale.  We began the tour with Maria Delgado Cayon.  She is the daughter of the owner, speaks impeccable English (Oxford educated), received a Sommelier certificate in Madrid and has a passion for good wine that rivals yours truly.  The facilities currently have a 100,000 kilo capacity.  They have a cold press, large stainless steel tanks, a semi automatic bottling machine from Italy that can accommodate 4,000 bottles per hour, and an onsite Enologist, Gabriel Morales.  I spent some time in the “lab” with Gabriel watching him test the various samples. Our tasting started with the 2014 Blanco Seco which was made up of Canary white varietals, Malvasia Aromatica and Malvasia Volcanic.  It also had Verdello, Gual, Marmajuelo, and Mostcatel (Muscat).  It was crisp, clean, had a nice mineralty and flavored with tropical fruits as well as citrus.  Next was the 2013 Tinto Coleccion.  This was made up of Merlot, Syrah, and Castellana.  It was an excellent wine and would pair well with pasta, rice dishes and even fish.  Next we tasted the 2014 Semi Dulce Blanco.  It was made up of Malvasia Aromatica and Moscatel.  A nice wine with some flavors of pear and not overly sweet.  We then finished with 2012 Tinto Barrica Anada.  This wine was made up of Listan Negro, Castellana, Cabernet Sauvignon, Merlot and Syrah.  Aged 8 months in the barrel and an additional 18 months in the bottle.  Great fuller body wine that can be paired with red meats. Maria was a gracious host, very knowledgeable about wines of all regions, and will most likely move into a more global distribution of their wines.  Look for the Caldera label in boutique stores soon. 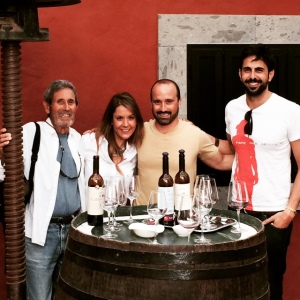 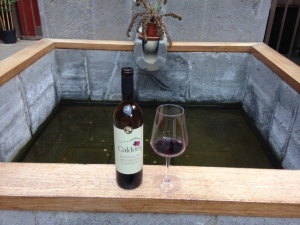 A day of wine tasting deserves a great late lunch.  Our gracious host, Victor Lugo Jorge, had the perfect spot in mind.  He took us to the posh restaurant, Casa Del Vino.  When we arrived, we experienced a wine tasting event for the “professional” wine tasters of the islands. Outside there was a table of at least 2 dozen wine experts from the various islands.  They were loudly enjoying their work of preparing to judge the wines produced in the Canary Islands.  Every single member of this group was well dressed and wearing sport coats.  They  sniffed, swirled, and savored mostly red wines.  It was quite spectacular, something I did not expect to see with this island culture. Victor seemed to know everyone as he was greeted with hugs and smiles At Casa del Vino. We indulged in extremely well prepared dishes served with the caliber found in the finest restaurants in Napa Valley.  The service was impeccable, and the dishes were perfectly prepared, and presented.  The dishes were served Tapas style with our group of four which included the proprietor of Bodegas de Berrazales, Victor Lugo Jorge. We started with freshly baked artisan bread and a salad topped with local warm goat cheese; amazing and savory. Next we moved on to a salmon tartare dish that was quite enjoyable and flavorful.  Then we tried a lightly fried cheese that was absolutely incredible and tasted out of this world.  It was surrounded by olive oil and herbs, crispy on the outside, gooey on the inside. Lastly we shared a sweet adobo pork dish and tuna steaks, both paired with amazing French fries.  It was quite the way to finish the day; big thanks to Victor Lugo Jorge of Bodega los Berrazales (http://bodegalosberrazales.com/portada_ingles.htm).

One thought on “Gran Canaria: The Santa Brígida Culture”